History of the Library

A Brief History of Public Libraries

The notion of a public library began in the United States around 1731, when Benjamin Franklin founded the Library Company of Philadelphia. Although the free public-access library we know and love today was more commonly established around 1833. By the early twentieth century, more than 3,500 public libraries could be found across the country.

One of the most iconic names in the world of libraries is Andrew Carnegie, the “Patron Saint of Libraries”, who funded nearly half of the country’s first library buildings. Carnegie is often quoted for saying that “the best philanthropic gift he could give to a community” was a free library. The state of Indiana received the greatest number of Carnegie library grants of any state. Between the years of 1901 to 1918, Indiana received a total of 156 Carnegie library grants, which allowed for the creation of 165 library buildings. Indiana still has the most remaining Carnegie Library buildings – the Fort Branch Public Library being one of them.

Fort Branch in the Early 1900s

The homes in Fort Branch, Indiana were first electrically lit in the summer of 1904, thanks to Walter C. Polk and Homer T. Genung, who built the first Light Plant in the small town. Fort Branch’s population grew quickly, especially with the expansion of railroads and train depots. Factories, mills, and coal mines provided laborers with job opportunities.

Along with the growing population, culture continued to develop in Fort Branch. In 1911, sponsored programs in tents were often organized on various lots in town. One of the lots that was frequently used belonged to Elizabeth Irwin. Her cow pasture on Locust Street was bought in May of 1916 by the first Fort Branch Library Board for the future location of a public library, which was to be funded by a $10,500 grant from the Andrew Carnegie foundation and money raised by the public. 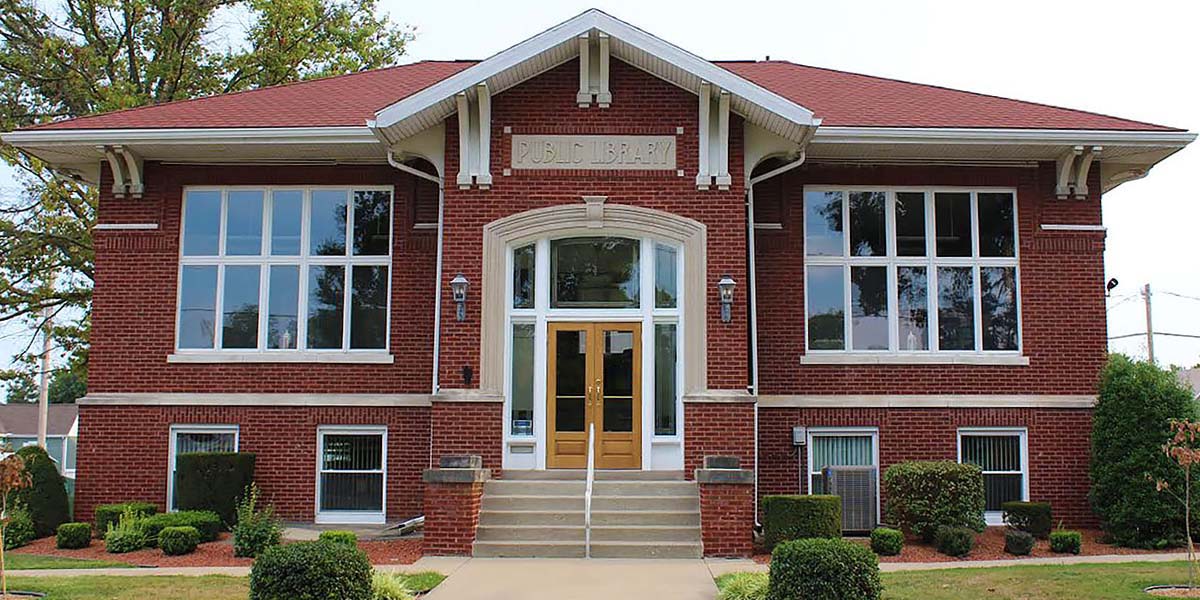 The 1500-volume library officially opened in June of 1917. The first librarian, Mattie Holcomb, remained at the library until July 4, 1934. Over the course of one hundred years, many changes altered the library, bringing new technology with computers and barcodes, along with the power of the internet. The modern public library now offers more services and resources for the community, and continues to adapt to cultural and technological advances.

In 1979, Indiana Public Library Law changed to allow a system of reciprocal borrowing between Indiana libraries that had the approval of their Board of Trustees. Many Indiana public libraries signed the Reciprocal Borrowing Covenant, allowing their patrons to utilize other local libraries under the same agreement. However, Johnson Township had no library service of its own, and thus could not reciprocate with other Gibson County public libraries.

Due to this lack of a resource, many Haubstadt residents spoke with the Haubstadt Town Board to establish a public library in Johnson Township. In August of 1980, Alice Chamberlain, the Town of Haubstadt’s treasurer at the time, wrote to the Indiana State Library to acquire a copy of  legal limitations regarding the funding of a new library. A response from the State Library came back stating that Johnson Township would be unable to start a new library due to the population being below the minimum 10,000 required.

As an alternative to building a new library, Indiana State Library consultant Martha Roblee suggested they find another public library to merge with and establish a branch of that library in Haubstadt. Doing so would mean levying a tax to support the library service in order to create a public library supported by tax revenue. 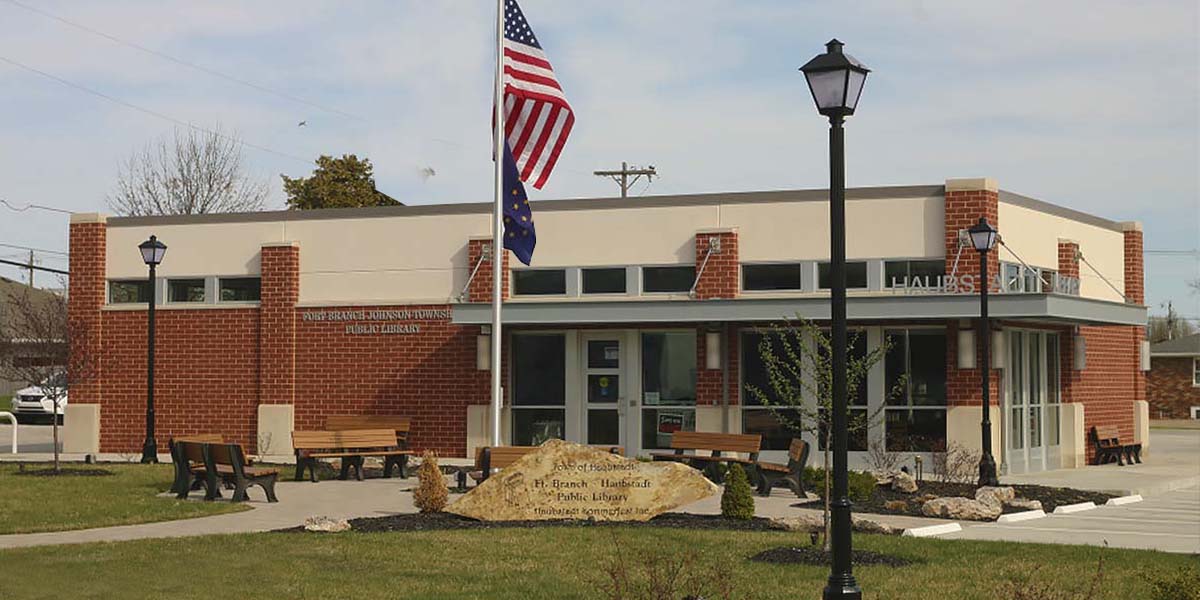 In September of 1982, the Haubstadt branch of the Fort Branch-Johnson Township Public Library moved into a leased room behind Haubstadt Town Hall. Originally intended as a pick-up and drop-off location, the library branch grew until more space was needed. Due to the lack of space, the Haubstadt branch was unable to offer programming for patrons, and could not expand their collection of materials.

In 2012, grant funds from OCRA and Toyota Manufacturing of Indiana were collected along with private donations from the Gibson County Community Foundation. Additional funds came from the town of Haubstadt and the Haubstadt Sommerfest Committee, as well as through internal library funds.

Construction for a new building began on April 8, 2013 through VPS Architecture and Danco Construction. The new location for the Haubstadt branch was a 2500-square-foot property formerly known as Will’s Corner, located at 101 West Gibson Street in Haubstadt, right across from its original location at town hall. In November of 2013, the Haubstadt Public Library opened in the new location. With the additional space in the new building, over time, the Haubstadt branch has become a second home for patrons of the Fort Branch-Johnson Township Public Library, featuring a larger collection and programs for all ages.

The Growth of the Fort Branch Public Library

As the Fort Branch Library entered the 21st Century, it realized it needed to provide more for its community. With library funds that she had saved, in 2001, Library Director Lois Kissel opened up the Fort Branch Learning Center. This building sat next to the Fort Branch Carnegie and included meeting and programming space (named the Lois Kissel Room), as well as one of the first computer labs in Southern Indiana.

In a step to continue to modernize the library and become more accessible to all those who wished to visit the library, Fort Branch set on a journey to rearrange and prepare for the next 100 years that it would serve its community. In this process, the library moved materials and spaces in a temporary setup to prepare for adding on and renovating its existing structures. Please visit www.fblibraryaddition.com to see what is to come!